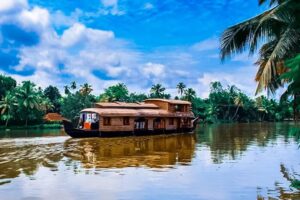 This is a restaurant that is run fully by Indians. We give you authentic food from Kerala,”the God’s Own Country”. Savour our authentic dishes and enjoy the true taste of India.

Spices are synonymous with Kerala, and its history is woven
into the history of this state. Cardamom, nutmeg, cloves,
cinnamon, pepper, vanilla, ginger and turmeric are just some
of the main spices grown in Kerala.

Spices like ginger, garlic, cardamom, vanilla, pepper,
cinnamon, cloves and nutmeg are mainly produced in Idukki
and neighbouring areas, with Malabar being the global
the epicentre of the spice trade. The monsoons which nourish
the pepper vine, this jewel amongst spices, also brought
customers across the oceans.
Cardamom or Elettaria Cardamomum Maton is hailed as
the Queen of Spices. The cardamom seeds have a slightly
pungent and aromatic flavour. They are used as a seasoning in
dishes, mainly in curries and pastries. The curry leaf tree is a
deciduous tree found growing in the mainland and is native
to India. This leaf (also called the sweet neem leaf) though
slightly bitter, has a distinct aroma and is used to flavour
most Indian cuisines. Frequently spotted in many vegetable
gardens in the homes of locals, these leaves have been
traditionally used to help with stomach ailments.
The main spices used in Indian cuisine are chilli, coriander,
cumin, turmeric, ginger and garlic, and each spice has got a
distinct taste and flavour. The beauty of traditional Indian
cooking is in the varying proportions of these spices that
result in a multitude of flavours that have made Indian
food so popular in the UK. Indian food owes its popularity
not only to the myriad of taste buds it stimulates but also
to its positive effect on the body. It promotes immunity, is
antiseptic and an effective part of a healthy diet.